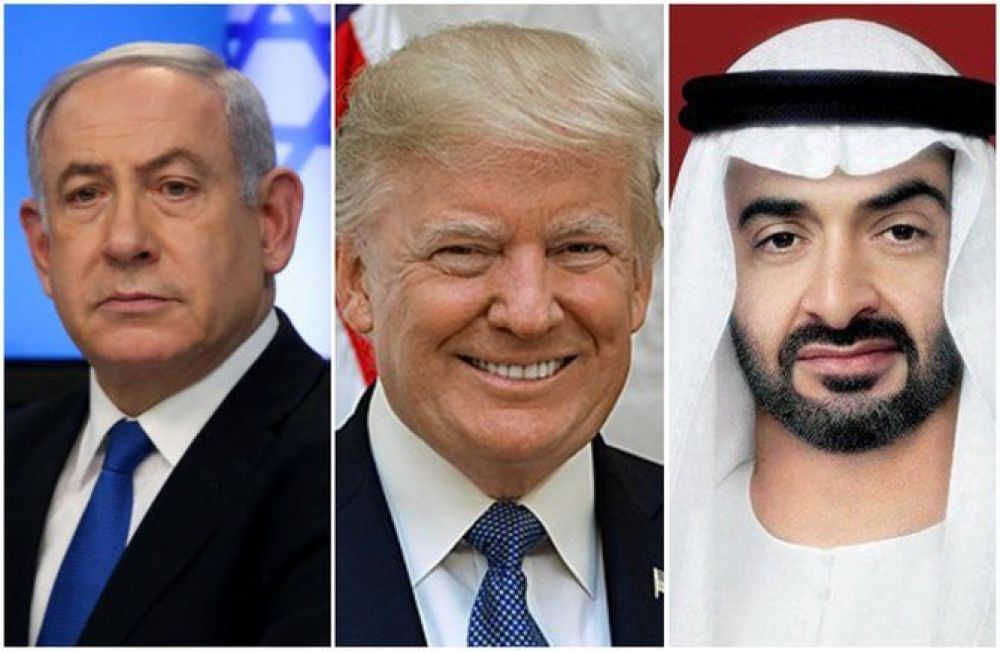 Good news for investors active in the Middle East. The United Arab Emirates (UAE) and Israel are going to normalize relations and this will possibly result in formal diplomatic ties. Crown Prince bin Zayed of the UAE and Israeli prime minister Benyamin Netanyahu are expected to sign bilateral deals in the coming weeks. The agreement should not be taken lightly. Yes, both countries already had under the table talks and cooperated on security issues. This agreement, however, does not just formalize that relationship, it also gives opportunity to deepen and broaden cooperation particularly on trade and investment. Furthermore, the UAE’s decision to recognize Israel and establish diplomatic relations will also make it easier for other countries in the Middle East to do the same and this will cause a potential geopolitical earthquake.

Why are we so bullish about the geopolitical of this agreement? All of us who studied International Relations or Middle Eastern Studies learned about Israel’s isolation in the Middle East. It is not just the only Jewish state in the region, obviously, but also on a diplomatic level Israel has very few friends. This isolation and continuous sense of threat explains to large extent Israel’s foreign policies. The agreement with the UAE could put that upside down.

How so? It is widely assumed that besides the UAE also Oman, Bahrain, and possibly even Saudi Arabia, Sudan, and Morocco would like to normalize relations with Israel. All countries have their own reasons and history. Oman probably already had the best relations with Israel before this deal, Bahrain has expressed willingness several times to normalize its relation with Israel over the last years and Sudan's new government wants to use a deal to get rid of US sanctions on the country.

This optimistic overview doesn't tend to imply that those countries will establish relations with Israel in the coming weeks. There are still many challenges to overcome. Crown Prince Mohammed bin Salman of Saudi Arabia, for example, would like to bring his country closer to the West and has been hinting towards formal ties with Israel but faces internal opposition. His father, King Salman of Saudia Arabia, still considers himself to be protector of the Palestinians. The Saudi king, while a strong supporter of his son's modernization campaign and bringing the country closer to the West, doesn´t seem eager to agree on diplomatic relations before an sovereign Palestinian state has been created. For now, Saudi Arabia will most likely use the UAE-Israel agreement to expand upon its secret ties with Israel while it might also use Bahrain, who's government it almost fully controls, to establish relations with Israel. In this way Saudi Arabia will prepare its relatively more conservative and larger population for a future deal.

The deal will also have consequences for the few countries Israel already has diplomatic relations with. Jordan and Egypt can use the diplomatic change to their benefit and intensify their relations with the Jewish state. Israel will come out of a position of isolation by entering a new multinational alliance that will define regional politics for many years to come. Turkey's leader Recep Tayyip Erdoğan on the other will feel sidelined now his rival, Crown Prince Mohammed bin Zayed of the UAE, is working on a new regional powerhouse where his country doesn't seem to be part of.

Who will lose out the most

The country that tends to lose out the most, however, is Iran. Both the UAE and Israel have bad relations with the Persian country. The current agreement formalizes a security alliance that was already going on for quite a while but will come as a surprise nonetheless. The UAE and Iran, despite their sectarian rivalry and conflicts, seemed to have established some channel of communication and cooperation. But there was always a danger in overvaluing these under the table talks. While the UAE and Israel do have a tense history as well, crown prince bin Zayed has declared himself to be a fierce opponent of political islam. His well known hatred towards Iran doesn't just come out of sectarian rivalry but mostly out of Tehran being a regional sponsor of sectarian and political islamic violence. Bin Zayed considers this to be the main challenge for the survival of his regime and the prosperity of his country. Any pratical working relationship was always the result of geographical vulnerability.

In other words, it is hard to see how this agreement will not be considered as a direct threat in Tehran. In fact, the UAE-Israel agreement should be perceived as the announcement of an alliance against Iran and other regional contenders. The earlier mentioned Arab states, while having covered ties with Iran or not, are all part of that same alliance.

While Iran was always able to comfort itself with the idea that most Gulf States had tied themselves to the old pan-Arab demand that Israel needed to negotiate a peace deal with the Palestinians first before entering formal relations with the Jewish state. That is not the case anymore. And if diplomatic ties are possible, what else can happen if the situation in the region escalates again, a question that will make many in the Persian state very nervous. The agreement will increase Iran's isolation in the Middle East and Tehran should be extremely worried.


It is a controversial statement but Trump was the missing link needed to bring the UAE-Israel relationship to the next level. His aggressive black-and-white approach in foreign policy has resulted in a lot of criticism. But in this context, it seems to have been working. For Israel and the Gulf states it has been much clearer where the USA stands. This approach was put in motion by Trump and his son-in-law Jared Kushner and resulted in the right level of trust needed to make this deal.

Trump was also able to make use of circumstances. His predecessor Barack Obama, together with secretaries of state Hillary Clinton and John Kerry, preferred a nuclear agreement with Iran. To do so, they bypassed traditional allies like the UAE, Saudi Arabia, and Israel while starting to work more closely with Qatar. It was a strategic mistake for America’s interests at the time but one that did eventually benefit Trump. He immediately restored America’s ties to Saudi Arabia and the UAE while indirectly supporting their counterattack on Qatar and withdrawing the US from the nuclear agreement with Iran.

Also for Israel’s prime minister, Benyamin Netanyahu, Trump's election was good news. This became most clear when the USA recognised Jerusalem as capital of the Jewish state and Netanyahu basically co-authored Jared Kushner’s ‘roadmap to peace’. This plan, proposing solutions for the Israeli-Palestinian conflict, was widely criticized but also created the room needed for the USA, Israel, and the Gulf countries to talk about real peace and cooperation. Some hawkish suggestions in the roadmap, like annexing a large part of the West Bank, were just the concessions needed for the UAE to justify an agreement with Israel; Netanyahu will gave up on a self-brokered annexation plan while the UAE finally got its reason to accept formal diplomatic ties.

Furthermore, the Trump administration is working on a new international coalition of like-minded governments. The UAE-Israel agreement was immediately praised by countries like the United Kingdom, Australia, and even India. This new international partnership is not solely aimed at Iran but also other challengers like China and possibly even Russia and Turkey. Besides security, it also seems to work together on trade and investment what can result in a new economic powerhouse. Even when Trump loses the presidency in November 2020, it is not likely that new president Joe Biden would want to give up on that.

This geopolitical shift will also result in much needed economic integration, an important ambition of both the UAE and Israel that is often overlooked. The UAE and Israel immediately referred to talks about “bilateral agreements regarding investment, tourism, direct flights, security and the establishment of reciprocal embassies." The Gulf States are dependent on their natural resources, particularly oil, and diversification is much needed. Fluctuating oil prices have caused serious problems over the last years while an international transition to new energy sources is challenging as well. "The end of the Arab world’s oil age is nigh", as the Economist headed earlier on this month.

The priority for the Gulf States is to realize long term food security by generating revenue from new sectors like sustainable energy, manufacturing, tourism, technology, and even aerospace. To realize such ambitions plans the Gulf states can't just count on their oil money but they need foreign investments and knowledge as well. Israel is attractive to them because it has a diversified and sustainable economy with strong agricultural, technological, and financial sectors. Not unimportant, Israel also has close ties to America’s financial centres.

Economic integration would also be great for Israel's long term safety concerns. Israel has a stable and sustainable economy but is vulnerable.  It's isolated position and a history of conflict always contained a certain level of risk for investors. The economic integration with the Gulf States, geographically speaking more natural partners, will make new conflicts and escalations less likely. It will also make Israel and those Gulf States more attractive to investors. Closed borders will be opened and used for trade. The economic potential of such cooperation, connected to ambitious regional plans for diversification, would be gigantic for American and Israeli investors .

The economic argument beneath the agreement will in our view only strengthen new diplomatic relations and stability in the region. It will subsequently result in a more diversified Middle East that is trying to move away from its oil dependency. This is good news for those states but also for investors looking for new opportunities.

Obviously, we always have to wait till the declarations are officially signed and how the wider Arab public responds to this deal. The latter will tell us if more countries will follow the UAE’s lead any time soon. Regardless, there is plenty of reason to be optimistic and for that reason we are bullish enough to start talking about a geopolitical and economic shift that has been in the making for a long time. This is also good news for investors. Israel and its Arab partners are clearly eying on new and more long term investment opportunities while building a strong base for trust.